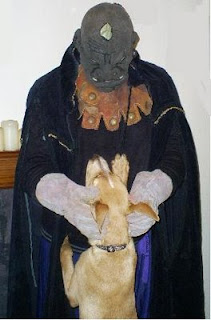 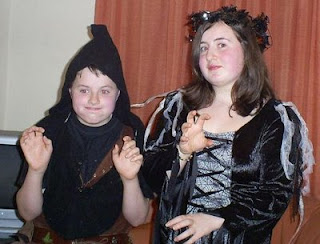 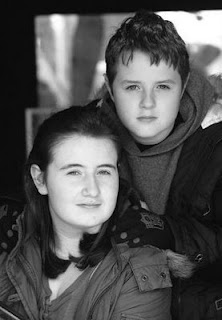 I promised to post a picture of me and I thought I'd throw in the kids as well. The first picture is me with our little puppy, Toby, he's only about 8 months old. He can be a pain in the posterior but he can also be very cute.

Some might say including my kids pictures is a bad idea but honestly there's far more risk in crossing the road. And the news media seems to exist largely to terrorise the population - and I refuse to be terrorised.

Besides the girl is 2nd Dan Jujitsu and knows half a dozen ways of killing someone, never mind breaking bones and dislocating joints - and the boy is also a black belt Jujitsu so knows quite a few of those methods too.

Unlike some martial arts real Jujitsu is not a sport and is intended as serious self-defence - how to disable an attacker with minimum effort and swiftly, it covers everything from distance attacks (kicks and strikes) to ground fighting (half a dozen exits from strangulation, for example), and how to deal with knife attacks.

Besides, this blog is semi-anonymous, it's not impossible to find out who I am - if you don't know already - but it would take a bit of work. (Do you think I've justified myself enough?)

So the second picture is them in their costumes (they don't look like this normally). All the costumes and much more besides, is kept in our cellar ready for events like this.

The final picture is the kids looking cool, as done by professional photographer, John Nichols, when the daughter went to get some headshots done.

What's nice is that they almost never argue, and get on well.

I'll stop procrastinating now and get back to Air.


What's on the turntable? "Bright Evening Star" by Maddy Prior and the Carnival Band from "Ringing the Changes"

Email ThisBlogThis!Share to TwitterShare to FacebookShare to Pinterest
It's all about: Air, Halloween, jujitsu, pets, procrastination, scriptwriting