For the first time in 20 years we were nearly snowed in. The boy stayed home because it was easier and the girl made her own way to college which involved a lot of walking, and sitting in buses that weren't moving. (Though she only has one lesson today but it's English which she loves.) 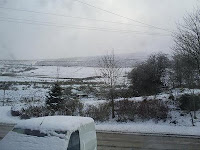 The front is nicer, especially when the back isn't covered in snow. What you see (or don't see due to low flying cloud) is the Pennines. There are a couple of houses on the hill but after that it's moors for the next 20 miles.

That's actually a main road out front (the van belongs to next door) but even during the rush hour it's not what you'd really call "busy".

The line running left to right, going up, is another road heading up to a cricket club. On the side of the hill. (They did find a flat bit.)


What's on the turntable? "The Remembering High the Memory" by Yes from "Tales of Topographic Oceans".

The story goes that Rick Wakeman had so little to do in this work (he left the band shortly afterwards) that on one occasion he ordered a curry delivered to him on stage at the Corn Exchange in Manchester. But he tells the tale slightly differently, he did say he wanted a curry and said so to a roadie, who brought it. But Rick actually meant after the performance.

Email ThisBlogThis!Share to TwitterShare to FacebookShare to Pinterest
It's all about: random, snow