I did a thing about using Celtx back here. Where I showed that celtx was so easy to use that my 11 year old son could do it after minimal instruction.

I don't really see myself as an advocate of Celtx, it's just that it's pretty good and it's free. (The free thing is fairly convincing.)

Anyway after my flurry of "must write some words" in my Air script, I got down to some more serious planning. As I have mentioned my workspace (such as it is) does not include a corkboard with index cards. But that doesn't mean that I don't use them.

On the contrary, up to now, I've used a piece of software called Storylines which is quite nice, but duplicates a lot of the functionality of Celtx without actually really being able to write a script with it. (You can but it's not straightforward.) And it costs money.

The latest version of Celtx integrated virtual index cards with its main script writing section which means you can plot out your story on "index cards" and have the scenes appear in the script area. And vice versa. You can colour the index cards for the various plot lines. Anyway as previously determined a picture is better than a thousand words, so here are some pictures: 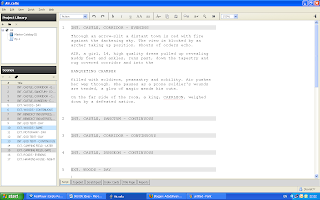 So this was the bit of script that I threw together last night. No comments please, first draft, demonstration purposes only and I already have changes in mind.

The extra scenes were not created on this page but on the next one... 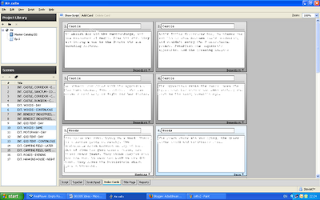 This is the index card page in the "notes" setting which means it's showing the notes that I made about every scene. I have taken the liberty of obscuring my actual notes.

Notice how the scene headings on the left are coloured with the plotline colouring. 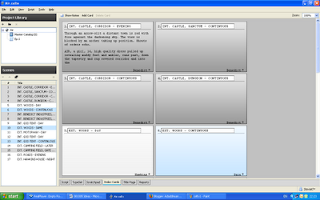 This is the scene-content version of the same index card page so you can see what you've written. Flip between them at a click.


I have to say that I really liked the way that works out and I'll definitely be using that feature again in future.


What's on the turntable? "Samba Pa Ti" by Santana from their "Greatest Hits" album. Even if you don't know Santana (Latin-American rock) you probably know this tune from the breakthrough M&S adverts of a couple of years ago.

Email ThisBlogThis!Share to TwitterShare to FacebookShare to Pinterest
It's all about: Air, celtx, scriptwriting