My Office and other stories

Okay there was a meme going around a while back about people's offices, where they write, being the new kid on the block I didn't get tagged (I've had my revenge).

This is my office: 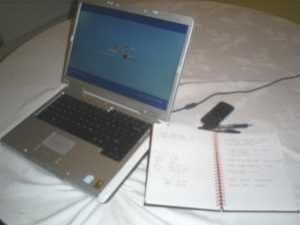 That's it. Notebook, pens, phone and computer. Exciting, isn't it?

I finally remembered what the resource was that I'd thought of while walking the dog. I went off to the website to see if it is still there and it is, though, in retrospect, perhaps it's not that brilliant a resource.

Alright, alright. It's called the Degree Confluence Project, and it's better than it used to be.

You know the Earth is mapped using imaginary lines called Longitude (which run north-south numbered 0 to 359) and Latitude (which go round and round parallel, to the Equator, numbered +90 to -90). Both are measured in degrees of angle.

So they are collecting photographic samples of the world at each one of these confluence points (there are rules, like ignoring any confluence point that's at sea and out of sight of land).

So if you want to know what a part of the world looks like, you might be able to find it using the Confluence Project.

Hm. I may miss my target on completing the first draft of Unit X by tomorrow. The problem is that my employer, on the last contract I did, has a day in hand - he paid me for an extra day. And now he wants to use it.


What's on the turntable? "Blush Response" by Vangelis from "Bladerunner CD1"

Email ThisBlogThis!Share to TwitterShare to FacebookShare to Pinterest
It's all about: confluence project, meme, scriptwriting, Unit X

I just tagged you on a meme!