In previous years I've made lots of notes and done a blow-by-blow account of this and similar events. I'm afraid that's not going to happen any more - at least not in detail. There are a couple of reasons for this: they are filming almost all the sessions so if you have access to the site you can see most sessions - even ones that conflict; and because once upon a time I was completely ignorant of screenwriting, but now I know a bit so I don't feel the need to make copious notes.

Also, as it happens, I missed most of the first day. I was there but the whole afternoon was taken up with the Advanced Mentoring session with major international TV producer Gub Neal (he has also produced three films but, as he said, that world is just weird).

On the previous night I had been afflicted by a proto-migraine, I don't get migraines (the lie down in a dark room and feel like you're dying kind) any more but if I've not slept properly for a few days I get the beginnings of a migraine, a headache which can get very painful unless I'm careful (chocolate helps).

Anyway I went to the London Screenwriters' Festival pre-launch thingy to get my event registration complete and to deliver some pitches I'd printed out for someone else. I didn't stay. Got back to the flat, watched the final episode of The Fades (quite good); practised my pitch again despite the headache; and then got an early night.

I knew I'd feel better in the morning and I did. 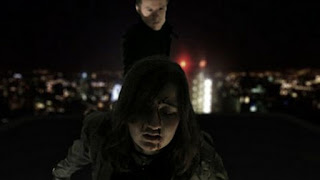 So then came the rushing around ensuring I had everything I needed for the Advanced Mentoring. I did not forget anything, and I remembered set up my computer with a new backdrop - the CGI shot from the Monsters trailer we'd done, created by the Director Chris. As I say that's a CGI shot, we weren't allowed on top of a skyscraper at night, it was actually shot in the cellar of my house.


I wanted it as the backdrop so I could have my computer open and displaying it as I did my pitch. I also download the trailer. I was in two minds about showing the trailer but decided to show it at the end of the pitch. I had all the leave-behinds printed - hey, I was taking this seriously and Gub is one of the biggest TV producers around.

So what was it we were doing? We'd been told it was a kind of Dragon's Den thing, each of us would pitch in turn to the rest of the group who pretended to be producers. Each was allocated five Monopoly money notes (5 x 100 units) which they could decide to invest in the pitched project. If the project got 1000 units of backing it could move ahead.

It's a nice game and worth copying because it's just like the real world - only a certain amount of money to go round and if you commit all your money then even if a better project comes along ,,, it's too late. Very instructional.

I listened to the first two pitches and terror began to set in, it wasn't that those pitches were especially good or not, it was that they weren't anything like what I'd prepared. And I knew some of the people around the table had been to the pitching training the day before, just not which ones. One of those pitches made it to the 1000, so went through. Worse and worse.

What to do? Could I change my pitch on-the-fly into something resembling what these other two had said? I was sweating, what to do? In the end I did the only thing I could do. I decided that, well, this was just a training session and I was here to learn, so I did it the way I prepared it.

I got up, set up my machine with the picture and did the pitch, fluffed it in a couple of places but not seriously. Then played the trailer. Gub's note on the pitch? "Very good pitch, don't use the trailer." Never had my flabber been so ghasted. And then? Everybody round the table just said it was great, that they really got the characters, crazy Dom threw in all his money, and I got the 1000 easily.

Why did Gub say don't use the trailer? In fact he'd said it for the same reason I was in two minds about using it: Because another producer, the inestimable Philip Shelley, had told me once not to direct any potential producers or financiers to the trailer. Not because it's bad, but because when someone reads the script (or gets pitched to) they have created an image in their imagination, if you show them the trailer that replaces what they've imagined and becomes the level of what they expect - I'm paraphrasing but that's essentially it.

Well, now I've been told twice, I won't do it again.

And so it went, another three pitches and one more person through to the final round.

The next round I had not prepared for, at least not directly, but I have to attribute my success to my friend Liz, for whom I had to print out the one page pitches mentioned earlier. I took one look at her pitches and went OMG my written pitches are nothing like this - and she's done an MA in screenwriting. (Are you sensing a pattern here?)

But it had meant that I had created a super-trimmed-down version one page pitch.

Gub announced that now he would pretend to be a TV commissioner for a broadcast company and we had to do a short pitch and then get grilled by him as to why he should help fund this project with a view to putting it into production.

I grabbed my super-new one-pager and used the first few lines with a few amendments, off the top of my head. He asked searching questions - I had answers, so thank you to all those people on the Intertubes who saw my request for difficult questions, they ensured I had an answer for everything.

Ultimately all three of us were sufficiently convincing - bearing in mind that this was make believe I got commissioned for further development for Sky 1, someone else got Channel 4 (for a very "difficult" piece), and the other was ... ITV?

Mind you, as Gub said afterwards, that was the easy version. But it's a game I'd like to play with the big boys :-)

We'd certainly been put through the mill and it was awesomely educational. I learned something: I actually love pitching.

(I did see a couple of sessions today and I would write about them but it's late and I need my sleepy-byes.)

What's on the turntable? "Life Burns" by Apocalyptica from "Apocalyptica" - you can't go wrong with heavy metal cellos.

Email ThisBlogThis!Share to TwitterShare to FacebookShare to Pinterest
It's all about: gub neal, LSF, LSF11, monsters, pitching